Out of all the different sports that I play video game versions of, boxing is pretty low on my list of preferred ones. Outside of Nintendo's Punch-Out!! series and Midway's Ready 2 Rumble games, I just don't understand the sport or the strategy well enough to appreciate most of games that represent the Sweet Science. There is one, however, that I come back to every so often... 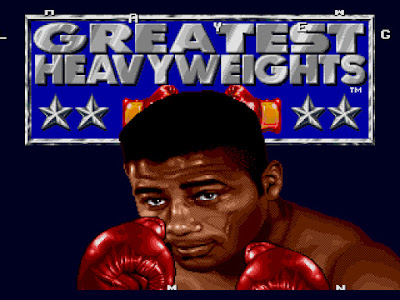 Greatest Heavyweights, developed by Malibu Interactive for the SEGA Sports brand and released for the SEGA Genesis in late 1993 didn't really get my attention until I started building a library of sports games back in 2012. I found the game complete for less than $5, and I liked what I saw on the back of the case. The visuals looked great, and the idea of playing as some of the most well-known pugilists of all time drew me in. It's certainly not another Punch-Out!!, but the pacing is quick and the difficulty curve is just right to draw players of all skill levels in.
A real boxing match has its peaks and valleys of activity. Boxers aren't just flailing away at each other. There's a strategy involved, targeting different parts of the body while defending against incoming blows. Sometimes fists will fly, other times it's quiet as boxers size each other up or regroup after an exchange. Greatest Heavyweights simulates this well, but moves quicker in pace than reality. There are times when boxers will pull back-- and even taunt each other, with rather foolish schoolyard insults like "Momma's boy!'-- but there are others where punches are fiercely exchanged, making violent contact at times. 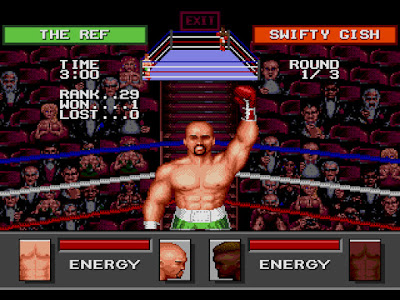 The play controls are pretty easy to learn. There's a button for each fist, and a button for blocking. Pressing a punch button and the block button together will launch an uppercut, which is the most damaging punch in the game... but is easy to see coming and can more easily be blocked. Jabs, hooks, and body blows are all simple to execute, though you don't always seem to get the intended punch. Using the D-pad to determine punch type should be more accurate, but can fail you during heated exchanges. It's not game-breaking, but can be annoying.
As punches land on a boxer, his energy depletes and his damage meter for either his head or body-- depending on where the punch strikes-- drops. Once a boxer's energy is depleted, a punch that lands will send him down to the canvas. A 10 count ends the fight, of course. Unlike Punch-Out!! or Ready 2 Rumble, however, boxers are scored at the end of each round between 1-10. At the end of the number of set rounds, if a knockout hasn't been registered, the boxer with the highest cumulative score from the judges wins by decision. Knocking an opponent down, landing a high number or percentage of punches thrown, and avoiding getting knocked down during a round will push the player's score higher. If the player is knocked down, mashing the A button repeatedly will restore energy and a prompt to press the C button to get up will flash when energy has been sufficiently restored. If the player has taken too much punishment, though, energy may not come back and the player will be counted out. 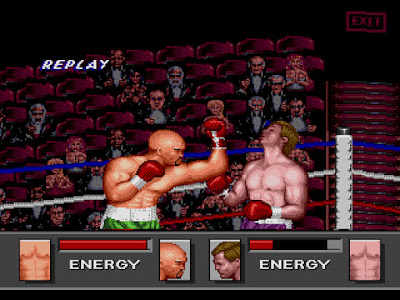 Everything flows well, whether players choose one of the Greatest Heavyweights to carry out a dream match, or if they embark on the game's Career Mode. The Career Mode isn't incredibly deep, but there are choices to be made after each match in terms of regimen to build a boxer's stats in three key areas: power, speed, and stamina. This allows players to create balanced fighters, power punchers, fighters who can withstand lots of physical abuse, or speedy fighters that opponents have a hard time keeping up with. I always build power punchers, which gets me through the first five or six bouts with ease. After that, weaknesses in speed and/or stamina often come back to haunt me as I face a speedy or stout opponent and brute force can't overcome weakness in other areas.
The game looks and sounds great. The fighters are all well-detailed and animate smoothly. The ring gently swings around-- though the camera keeps the fighters in the middle of the screen-- and the crowd is into what's happening. Uppercuts boom when they land, while hooks and jabs thump. The music is sparse, but does the job in menus and between fights. Notably, Michael "Let's Get Ready to Rumble!" Buffer is the announcer for the game, and his voice samples are clear and strong. During Career Mode, a post-match newspaper page flashes an appropriate personalized headline and takes a picture from the replay of the final knockdown. It's a neat touch. 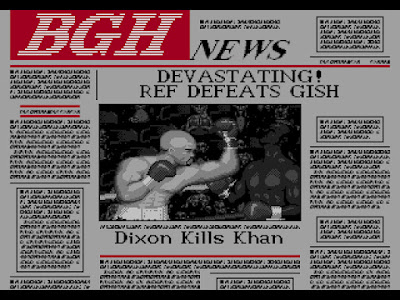 Though I do struggle with the game's difficulty before too long, I still find myself coming back to Greatest Heavyweights occasionally, like I have for this piece. I do prefer more arcade-style boxing games, but I think this one straddles a fine line between arcade and simulation to deliver a game that hardcore fans of boxing and more general sports video game players like myself can both enjoy. If you've got a Genesis console at your disposal, grab this one and lace up the gloves.
The Ref's Decision: We have a winner!
Buyer's Note: As of this writing, PriceCharting currently lists the game at around $9 for a cartridge-only copy and around $17 for a complete-in-box copy.
Posted by Pete Skerritt at 5:10 AM