Summer is almost here, and my thoughts this time of year often go back to one of my least favorite activities that I was forced to endure as a child: camping. You see... I'm not the outdoorsy type, and yet my mom's parents were in the Boy and Girl Scouts, and my mom followed suit in the whole camping thing. Me? Back in the 1980s, I wanted to stay home, watch MTV, maybe play some Commodore 64 games, and leave the bees, bugs, and dirt for someone else.

And yet... most weekends from Memorial Day to Labor Day-- and sometimes during the week-- my mom loaded myself, my siblings, and essentials into the car for a trip to rural Whately, Massachusetts. 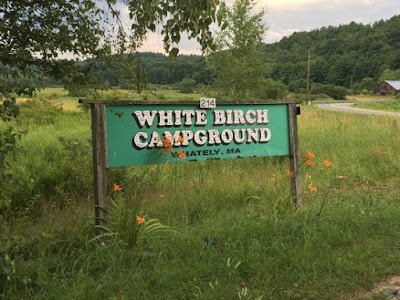 That's where White Birch Campground was (and still is). My maternal grandparents had a seasonal site there every year until they died, complete with a camper for them... and a musty old tent for us. Lovely.

It was somewhat easier to handle as a young kid. It got harder as a middle school kid and a high school student. None of my classmates came here. I sure wasn't bringing a computer, and my mom frowned on my taking electronic games on the trip. The pool there was fine in small doses, though I got an ear infection after swimming in it during the summer of 1985, which caused my ear to bleed. The pavilion sometimes had a makeshift DJ on Saturday nights, but there wasn't much music that I wanted to hear playing.

Of course, it wasn't the campground's fault that I didn't like camping. The staff was nice enough when I was there. They called me by name, and often chatted me up if they drove by on their golf carts. I generally saw them in the rec hall. The rec hall sold candy (and other, more essential goods), plus it had some soccer balls and lawn darts for us to take out and try to pass the time. It was a place to hang out when it was raining or when it was a little too hot in the sunlight. 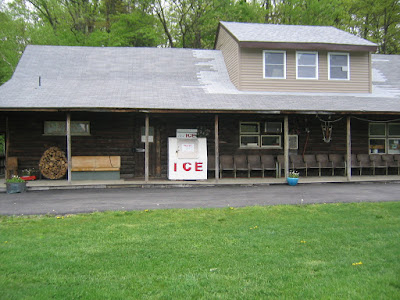 I loved the rec hall because it also had arcade games inside. They weren't top of the line, mind you. The Missile Command cabinet had exposed metal that would sometimes give you a little shock if you leaned on it the right way. The Aquarius pinball machine had carbon buildup on the table, slightly blackening the colorful playfield under the glass. Battlezone was okay, but I stunk at it and rarely wanted to waste one of the precious quarters that I had to continually beg my mom or her parents to give me on it. Galaga was there, too, but I never appreciated the game back then like I do now as an old man. Mr. Do's Castle was a cool game, and I had rarely seen it in arcades. I liked watching others play it more than playing it myself.

There was one game that always got at least one quarter from me, even though it was set up to steal your money quickly. It's a game that, even more than 35 years later, I still can't play very well. It's a game that helped to fuel my early interest in sports video games. 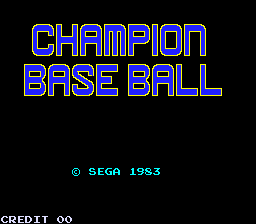 Champion Baseball commanded my attention the first time I saw it... or, rather, I heard it. The game has speech, notably umpire calls that are clear and authoritative. I watched someone else play it first, taking turns between batting and pitching, trying to outscore the CPU or at least keep the game tied after the bottom of each inning. If the computer opponent takes the lead before the third out in the bottom of an inning, the game is over. It is possible for the game to end before a full inning is played, by the way. Losing a credit in less than three minutes was frustrating.

Let's back up for a bit and talk about how the game is played. After inserting a quarter and pressing START, a Team Select screen appears. Each team is loosely based on Major League Baseball counterparts, but with generic city names, player names, and stats. While there may be better teams to select than others, it becomes quickly apparent that the earned run average stats are only there for show. Pitchers with ERAs under 2.50 should not get knocked around after a third of an inning, but it often happens here.

Once a team is selected, the computer picks an opposing team and takes the field. Having the first at-bats of the game allows players to perhaps build a lead out of the gate and provide a cushion for their hapless pitchers later. The pitcher versus batter showdown plays out in a vertical window on the left side of the screen. The rest of the screen shows the fielder and any baserunners. Stealing is an option after getting on base, but computer-controlled catchers are extremely accurate-- so it's critical to steal only once in a while. Pitches move down toward the batter, and can be curved left and right. It's a weird top-down but level perspective, but it works. Batting is as simple as timing the swing to make contact and moving the batter left or right to account for the break on certain pitches. 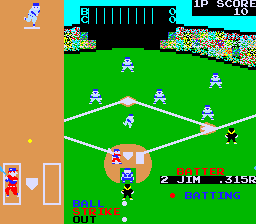 After making contact, some of the game's problems become apparent: the computer-controlled fielders have amazing arms and can sometimes throw out runners at first base after what looked like an easy single. However, for runners that get on base, and for players who become adept at the game's baserunning controls, it's unfortunately possible to goad the rudimentary fielding AI into making boneheaded throws to the wrong bases, thus turning many hits with runners on into RBI opportunities. It's not quite cheating, per se, but it is taking advantage of the computer and thus leading to dozens of runs scored. In this case, it's possible to outslug the computer and win games after a combined 40 or 50 runs.

Any and all runs that the player's offense can score are going to be needed, because the CPU's offense will heat up and plate runs of its own. Pitching is a simple concept, at least. Left and right break can be added to pitches after release, and it's possible (especially early) to paint the corners with just the right amount of curve. CPU batters even strike out in early at-bats against pitchers who change speeds and locations... but this is usually resolved after the first inning or two. 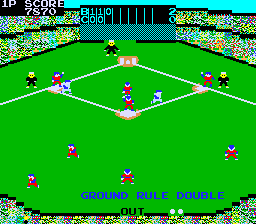 Once batters starting connecting with a player's pitches, the game's automatic fielding often turns defense into a nightmare. Players can only control where to throw the ball to once it's fielded. Defensive positioning is, unfortunately, automatic... and far less than optimal. Fielders take weird angles to ground balls, or they sometimes don't react well to line drives. Fly balls can sometimes take fielders by surprise as they play too shallow, leading to extra bases and/or runs scored against. Fielders cannot dive or make plays against the wall. In short, after players make their pitches, they must rely on the computer to put their fielders in the best positions to make a play.

As with most arcade games from this time period, success in Champion Baseball is measured by a player's point total. Points are accumulated through many actions, including putting the bat on the ball on offense, touching each base as a runner, scoring runs, registering outs on defense, and more. It's possible to get a Top 5 score even if a player only makes it to the second or third innings. It's not quite as satisfying as beating the CPU in a complete nine-inning game, but getting to register your initials for everyone else to see who plays the game afterwards was a nice bonus. 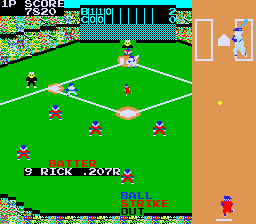 When I think back on Champion Baseball now, it's fair to believe that I dropped well over 100 quarters into the game over the course of about six summers. I made it to the fifth inning once, but that was as far as I ever got. Playing the game recently to get screens for this piece, I was able to get to the third inning a couple of times, but always got beat by an opponent who suddenly knew how and where to hit the ball so my fielders couldn't do much.

When I was a kid and money was tight, I'll admit to getting frustrated at the game a few times-- and I even let out a string of expletives one time that I'm sure the campground manager overheard. Now, though? I'm not bothered by it. Granted, I'm not spending money on the game anymore, but I'm also older and wiser. I'm also cheered by the memories that playing the game brings to the front of my mind. Sure, I hated camping-- and still do-- but that rec hall was my place to get away from getting away from it all... and I'm glad now, years later, that my mom insisted on taking me to White Birch every year. I never would have had these memories, and probably wouldn't have really given Champion Baseball a chance at my local arcade, if not for that place.
Posted by Pete Skerritt at 6:58 AM