When nine year-old me first heard that voice while looking around at the arcade machines at a Norwich, Connecticut bowling alley back in 1981, I was freaked out. Who said that, and how did anyone else know that I had two quarters in my pocket? The voice came from an arcade game called Berzerk, and that immediately caught my attention. I needed to play this game-- it talked!

I put my quarter in, and was greeted by a maze-like room with robots in it. They were just kind of standing there, so it was easy to destroy them by firing my laser. It was kind of creepy, though; there was no music-- just the sound of laser fire and exploding robots. Then the voice boomed again:

It sent a chill down my young spine. It was me or them. I tried to quickly dispatch the robots. It was weird that they were just standing there, but I didn't want to take any chances. As each robot exploded, my score increased by 50 points. Destroying all of the robots gave my score a nice boost, too. After eliminating the last enemy in the room, I left via the right exit. "This is pretty easy," I remember saying to myself. 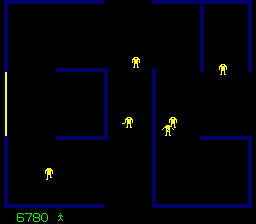 The next room had a different layout, and the robots were a different color. Unlike the last room, the robots were firing at me this time. Their shots were slow and easily avoidable. One robot shot another in trying to take me down. Two others ran into each other. I was a bit more methodical this time, being careful not to eat a laser beam. With one robot left, that voice sounded an ominous warning:

Huh? What was this? Emerging from the left side of the room was this bouncing ball with a smiling face. "Bonus points!" I thought to myself, as I charged at the grinning sphere-- but that was a mistake. Laser fire did nothing as the thing happily bounced toward me. I turned to run, and wound up banging into a wall-- which zapped me dead!

GOT THE HUMANOID! GOT THE INTRUDER! 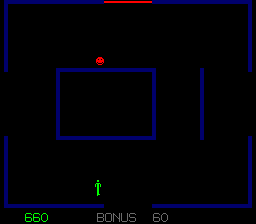 I made it through another pair of rooms. The robots got faster and more accurate with their gunfire. In trying to zap all of the robots in a room, that bouncing ball would show up and chase me down. It bounced into me and zapped me in one room, taking my last extra life. In the next room, in order to survive, I decided to flee when it appeared. The decision to leave any robots surviving elicited trash talk from the disembodied voice:

I lost my final life in the next room, thanks to not seeing a laser beam shot at me diagonally. I got to put my initials in for a high score, and I became a fan of this game for life thereafter. This never-ending battle for survival against the machines and the creepy voice received more than several of the quarters that I would have during my year or so living in this small Connecticut town. Since the bowling alley was within a short walking distance from where I was living, I would sometimes walk down there and just hang out, hoping to find quarters in the coin return slots or maybe get to watch someone else play the game. 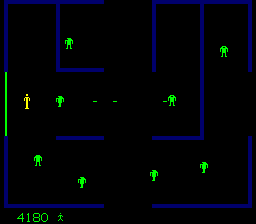 Berzerk, on the surface, is a very simple game with three key objectives: Destroy robots, navigate each room's pseudo-labyrinthine layout, and survive as long as possible. It's got a simple control scheme, too, using just a joystick and a fire button. It's easy to learn, and the gradually-increasing difficulty succeeds at drawing players in with early success...  only to humble and humiliate them before too long. This is, after all, an arcade game-- and the mission of any arcade game is to separate a player from that player's coins. Getting more than 5 minutes out of one credit is a pretty good run. Heck, in revisiting Berzerk for this piece, I was only able to manage 8,000 points twice-- and never scored 10,000. If you get to a room with silver robots (more than a dozen screens in), the laser fire is nearly impossible to avoid because of its speed and frequency. You almost have to anticipate where shots will come from and hope that a few robots off each other to stand a chance.

The game's simple graphics still hold up today, nearly four decades later. The robots change color after each couple of rooms, but the sprite remains the same. There's something about Evil Otto-- the indestructible bouncing ball of death-- mostly because of that unchanging smile as it bounds toward the player. It's just a simple sphere with a smiley face, but Evil Otto is unforgettable once it chases you down. The animation of the player is pretty good, too. All told, that visual simplicity allows Berzerk to be a timeless classic that can be enjoyed by any player of any age, from any generation of video gaming.

The sound-- particularly that robotic voice-- is what makes Berzerk memorable for me. Voice in arcade games around this time always got my attention. Not too far away from the Berzerk machine at this bowling alley was Gorgar, a 1979 pinball machine from Williams that also utilized voice. Across the street from the bowling alley was a diner that had a Vanguard machine, which had some digitized voice included. Wizard of Wor and Gorf are also up there for me when it comes to voice in arcade games. That said, it was that one line about a coin being detected in my pocket that grabbed my attention... and the rest has been history. 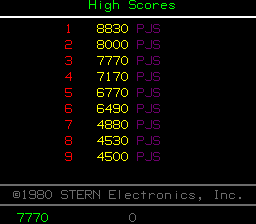 Posted by Pete Skerritt at 8:15 AM