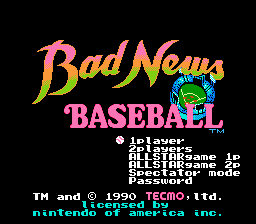 Bad News Baseball isn't necessarily one of the games that comes to mind when thinking about NES baseball titles. Most players will instinctively think of RBI Baseball, Baseball Stars, or Bases Loaded... but this game absolutely deserves to be added to the conversation when considering some of the best baseball games for the console. It's easy to play, has plenty of replay value, and incorporates Tecmo's then-trademark cutscenes to spice up the experience.

Pitchers can change speeds and add a measure of break, but their skill in these areas is dictated by stats that managers can look at before each game. Some pitchers are fireballers, reaching speeds of over 100mph. Others can curve inside and outside, painting the corners with efficiency. Holding the D-pad up while pitching turns the pitch into a forkball that falls onto the plate and can fool certain hitters. Unfortunately, pitcher stamina is very short. After just a few fastballs or forkballs, pitchers lose a lot of velocity, making their deliveries easier to make contact with. Careful management of pitcher stamina is a requisite, even for teams that hold significant leads. 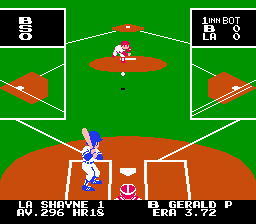 There's no doubt that offense is the star of the show here. Home runs come in bunches, with teams occasionally stringing together three or four round-trippers in a row. There are some seeing-eye grounders that can take defenses by surprise and speedy runners can sometimes turn these into extra-base hits. Computer-controlled pitchers are often always around the plate, so timing and an aggressive approach are favored over patience and taking pitches.

Fielding is decent. Players must react and move fielders at the ping of the bat, ranging deep on fly balls and ranging left or right depending on the batted ball's flight path. With some practice, fielding becomes fairly reliable; however, errors occur randomly and can sometimes be the difference between a 1-2-3 inning and a crooked number. 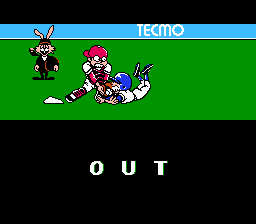 Games move at a quick pace, even in blowout situations, and full games can be played in 15-20 minutes. Cutscenes occasionally pop up during close calls on the basepaths, and always play after home runs. There are several different homer scenes, based on situations like solo shots or three-run jacks. They're reminiscent of a Little League game, with lots of team interaction and poking fun at adults-- like sleeping coaches in the dugout. Particularly long drives have a cool outer space scene that's seemingly pulled straight out of Baseball Bugs. These cutscenes add personality to the overall game while not being obtrusive or annoying.

Replay value for solo players revolves around trying to beat each team in the game. Difficulty gradually increases with each successive matchup. Don't expect to blow out later opponents after winning by the 10+ run "mercy rule" early on. Unfortunately, the passwords to resume play are lengthy, and it's recommended that players take snap photos of these if needed instead of writing them down. A battery save would've been really nice here. 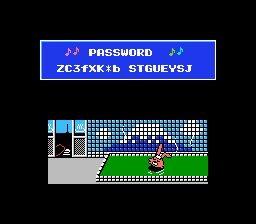 The visuals are generally quite good, especially during the cutscenes and the pitcher/batter matchup. Players are nicely detailed and animate well through their swings or pitching motions. When the camera zooms out to a fielding perspective, players all look the same. One unique animation is that, when offensive players are called out, they fall to the ground with stars dancing around their heads. This gets old fast, though. Sound is fueled by catchy theme music for each team and occasional digitized voice calls from the long-eared bunny umpire. It's a decent audio-visual package overall that performs well and doesn't have too many drawbacks.

Bad News Baseball may be lacking features that the more prominent NES baseball games have, but it's not lacking at all in the fun department-- and that's what counts the most. Whether you just fire it up for a quick game or two, or whether you want to see what happens when you beat all of the teams, this game is worthy of a place in your NES library. 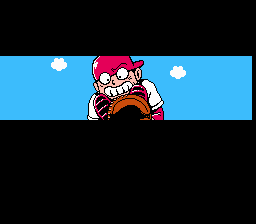 Posted by Pete Skerritt at 4:25 AM