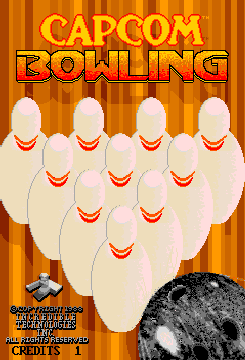 Bowling has been a favorite hobby of mine for decades. One of the coolest non-electronic birthday presents I ever got was a set of plastic bowling pins and a ball for my ninth birthday in 1981. I would bowl along with TV shows like Bowling For Dollars or telecasts of the PBA Tour every Saturday. A few years later, in 1986, I joined a youth candlepin bowling league... then, during my adult life, I began ten-pin bowling in 1993. The ten-pin bowling league was really a front to get into the good graces of my then-girlfriend's parents, who were league bowlers. I even bought a $200 ball, a pair of shoes, and a bowling bag to try and fit in. In time, I learned how to bowl okay, and learned how to "hook"-- or curve-- the ball from right to left like the pros do. I bowled in leagues on and off until 2001; I tried to get back into it last year, but this 47 year-old body isn't built for the rigors of 50-60 hard-cranking throws of a 15-pound ball anymore.

"What's your point?" you're probably asking.

Well, arcade games and bowling alleys go hand in hand. Bowling alleys introduced me to coin-ops that I've forever enjoyed since, like Berzerk, Gorgar pinball, Street Fighter Alpha, and more. One such game is Capcom Bowling, developed by Incredible Technologies and released by Capcom in 1988. Virtual bowling in a bowling alley? It's just crazy enough to work, and I sure dropped a few quarters into that machine either at the bowling alley or in my favorite mall arcade during that time. It's a rather no-frills kind of experience; aside from a high score leaderboard, there's no stat tracking, characters to pick from, or even a bowler displayed on-screen. It's your ball, ten pins, and a wooden lane between them.

The best part of Capcom Bowling is its simplicity. Using a Trak-Ball controller, players roll the ball toward the pins and aim for the "pocket"-- the space between the front (head) pin and either pin just behind it. Finding the right speed is important, too; launching the ball down the lane doesn't allow the pins to react and often leaves nasty splits. There is an option to hook the ball either slightly or more severely, but I honestly never use it since a straighter trajectory works just as well in most situations. Like real bowling, the biggest challenge is being consistent with your shots every frame. Slightly slower speed or missing the target by even a little bit can mean the difference between a strike and a split. Whatever you do, be sure to watch the hourglass! If time runs out on your turn, it's a foul!

The presentation is laid back and amusing. After most spares or strikes, a short cutscene will play. It's fun to see how many you can watch during a game or two. Cows, kangaroos, animated bowling balls, and more will pop up to compliment your performance. Rolling the ball between pins of a split, much like kicking a football through the uprights, will sometimes trigger a funny field goal scene. Electronic bowling alley scoring these days employs the same kind of fun animations after each frame, so perhaps Capcom Bowling was a bit of a trendsetter!

Playing the game alone, as I often did (and still do), means a pretty quick experience. Solo games can be completed in just a couple of minutes. It means competing against the leaderboard for the right to enter your initials for other players to see. Adding up to three friends, usually for only a quarter per player, makes the experience a lot more competitive and fun. It's especially fun at a bowling alley or a bar, where you and your friends can just hang out, talk a little playful trash, and have a few drinks (or Pepsis, in my case).

Speaking of drinks, there's an alternate release of this game, called Coors Light Bowling, which came out a year later. Much like Midway's Budweiser-branded Tapper coin-op, Coors Light Bowling is loaded with Coors Light cross-branding in the game's presentation. The cutscenes are different here, with shots of the Coors Light logo or characters from Capcom Bowling holding beer cans instead of bowling pins. Rolling a strike in the 5th frame will earn players a "Beer Frame" cutscene, featuring a mug of (what else?) Coors Light. A few of the cutscenes are a bit more... adult, as well. If you see the bowling pin with the Mary Hart legs, you'll know what I mean. Obviously, this cabinet wasn't found in most arcades; you had to find this one in bowling alleys or bars. If you've played Capcom Bowling, though, you've played Coors Light Bowling.

One last note to make here is that Incredible Technologies, the development team behind the game, would quickly go on to make a game called Golden Tee Golf in 1989. You might have heard of that one before. Much like Capcom Bowling, Golden Tee uses the Trak-Ball controller; pull the ball back to set the backswing, then hammer it forward to let it rip. Golden Tee Golf eventually replaced Capcom Bowling at many bowling alleys as the de facto arcade game of choice.

I have a lot of fond memories of Capcom Bowling, and playing it definitely takes back in time. It's not the deepest game, it's not the most fully-featured game, and it's not the hardest game around... but it's what a classic arcade game should be: easy to learn, difficult to master, and fun to play. It makes me long for mall arcades, chicken tenders and Pepsi at the local bowling alley, and the days when I could bowl fifty frames without getting sore knees or other pain.
Posted by Pete Skerritt at 7:08 AM